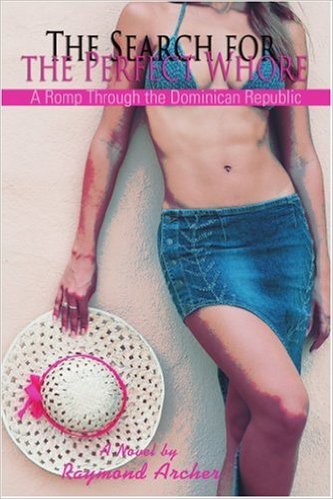 The full title, if you’re looking for it on Amazon, is: The Search for the Perfect Wh0.re: A Romp Through the Dominican Republic by Raymond Archer.

The book is listed as a novel, and although it’s hard to imagine that it’s not HIGHLY autobiographical, it reads like a novel. At the same time, the book’s purpose is to be informative about the scene in the Dominican Republic while being entertaining at the same time.

As a novel, it doesn’t have much of a plot, though I don’t suppose most readers expect one or will be bothered. There is a lot of dialog, which contains the bulk of advice, observations and humor in the book. I have never been to the Dominican Republic, though several of my friends have. This book covers a lot more than what I gathered from talking to friends, but nothing in the book contradicts anything I have heard, and all the additional info there feels quite in line with what else I have been told.

Every country has its idiosyncrasies, and the Dominican Republic is no exception. I’ve done my share of mongering in other locations, and there are both common ground and unique aspects to each destination. Even within a country there are differences. For those who have never been, the “novel” gives the reader a pretty fair idea of what to expect on a trip to the Dominican Republic, assuming the reader has similar “interests” for going.

For readers who have already been there, the book may be entertaining as it triggers memories and evokes the atmosphere and culture that prior visitors enjoyed. Beyond that, there is always something new to be found in other mongers’ experiences and observations.

I read some of the reviews on Amazon regarding this book, and half of them weren’t reviews of the book at all, but rather moralistic denunciations of the whole idea that a ‘mature’ man would actually pay for sex, let alone travel anywhere, no matter how nice, to enjoy paid sex. For that reason, the book’s overall rating suffers, garnering only a star and a half. It’s a better book than that. Don’t be put off by the reviews by the Puritan Morality Police.

Mr. Archer’s book is not a guide book, but it does contain plenty of information. As a novel, it’s not a spellbinding page-turner, nor was it meant to be. Those interested in the destination and the hobby may find it entertaining and/or informative. Check out the sample (skip the critique at the beginning by Krill… it’s almost totally irrelevant to the book) and see if you like the style. If so, there’s enough substance inside to make it worth reading by men interested in the destination and/or lifestyle.