Sometimes you get lucky and get a good tip. A couple of times I have been given info about specific chicas that turned out to be totally ‘on the money.’ One was an older spinner who wore her hair in a mullet, which made me think ‘lesbian.’ Definitely not, though, and an absolute doll overall. Another regarded a statuesque beauty who hung out at the Key Largo in San Jose. A fellow monger told me she was both good and would happily accompany mi for a modest amount.


Other, more general advice misses the mark often enough to be useless in some cases, or counter productive in the worst cases. To give one example, many mongers will tell you NEVER pay in advance. If I had followed that advice to the letter, I would have missed some very nice experiences. Not all chicas are worried about not getting paid, but plenty have been ‘stiffed’ by customers and their distrust is as reasonable as yours is. It’s your call. And theirs.

A rule of the thumb you can go by is that the more general the advice, the less likely it will be universally true. When I was in San Jose, I was told to avoid Colombians. It was somewhat true that they often had a higher asking price. But I have had great times with Colombians. Somebody else told me that Dominicans were always hot. Well, I will say that I have had some great sessions with Dominicanas, no question. But nationality is not a slam dunk any more than the color of her underwear.

Bottom line: The more general the advice, the less reliable. The more specific, the more dependable.

I wish that advice didn’t sound so general…

I’m not talking about ordinary houses here, I’m sure you know. Now there are a few that actually call themselves “massage parlors” or “spas” but the general idea is that there are a number of ladies inside these places waiting for a guy like you (or unlike you if you don’t show up) to engage her in some hanky panky in exchange for a modest sum.

They tend to be somewhat clustered in the Candelaria district of central Medellin, though a few others are scattered about the city… in Laureles, Belen, Itagui and such. Most gringos prefer the downtown casas because they are concentrated in a nice small area and you can easily visit 5 places in a walk of a couple of blocks.

Normally, the guys have a favorite place or two, though there are some who enjoy scouting out multiple places, looking for new “faces,” or maybe not faces? Whatever,

The traditional way things are done here is that when you enter and sit down (or not) the manager will call for a “presentation,” which consists of every unoccupied girl in the place coming out and introducing themselves. Normally this includes the girl giving you a cursory hand shake and telling you her name. This seems quite simple, but the trick is remembering who it was you liked best, her name, that is. I remember a guy who used to go on daytime talk shows, Harry Loraine, who used to be able to memorize everybody in the audience’s name at one go. I’m guessing that’s not you. It sure ain’t me.

My method is to only attempt to remember a name when the chica is more appealing than all those before her. That way you only have to really remember one name at a time.

So there you go, pro tip of the week.

At the most basic level, though, it’s pretty straightforward. The seller is offering sex for money. But much like the legendary used car salesman, the sales pitch may not be reliable. Sure, the salesman is offering you a ’97 Hyundai, and you can see that. But you can certainly be excused if you don’t believe it is a one owner car, owned by a little old lady from Bakersfield who only used it to drive back and forth to the grocery store once a week.

Likewise, when reading an ‘adult’ advertisement, a healthy skepticism is called for. For example, it isn’t possible that every single working girl gives the best oral in the country. I mean, was there some kind of contest somewhere? I obviously missed it if there was. Who were the judges? How much did they pay to BE the judges? I am going to take a wild guess and say there never was such a contest. Call me a cynic.

So that brings me to the topic of the day. It’s pretty common to see these chicas describing themselves as nymphomaniacs or insatiable. I have a fair amount of experience, if I may say so, and almost all women I have been with have been willing to let me stop after a) they had their usual # of orgasms (1 and 0 being the most common #s) or b) some agreed upon time limit, with a half hour or full hour being the most common.

All that being said, I have run into a few ladies who come close to being insatiable. Magdalena, the subject of my biographical novel, was (and is) capable of double digit orgasms, and usually only wants to quit when her body starts to give out. I met another, recently, who was about as close to insatiable as could be imagined. She would only quit when she had to leave to get back home to cook dinner or get the kid to school. Sadly, as sexual as she was, she wasn’t that good. Her enthusiasm was unmatched, but her style wasn’t what I like. Plus, she tried to steal a credit card. Nobody’s perfect.

Last and least is the truly insatiable type, which is to say, non-orgasmic, EVER. Of course we can never know that it’s not US that isn’t getting the job done, but I have met several women who say they never climax. Never have and never will. Maybe that’s the kind of ‘insatiable’ some of the escorts are referring to. Maybe they aren’t lying after all! 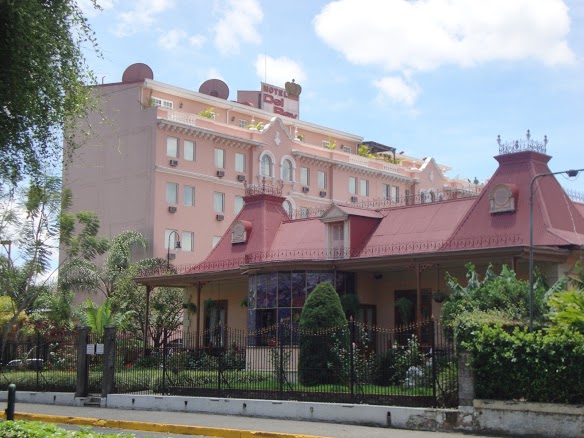 The time was December, 2003, and I was on my first visit to Costa Rica. For reasons I can’t recall, I was up and about very early my first day in San Jose. It was so early that the morning heading-to-work crowd was just getting going. I had a map on which I had marked a few points of interest. One of them was the famous Hotel Del Rey.

Back then, there was a web site with a discussion area called “Costaricasex.com” What I knew about the “scene” in town was almost exclusively from this site, which, I learned shortly, was falling into neglect. Nevertheless, considering the depth of my ignorance, provided plenty of raw materials for my search for willing female companions.

Based on what I read, I had mixed emotions as I approached the Big Pink Hotel for the first time. I have to admit feeling somewhat intimidated. The mental picture I had gathered from reading the various monger posts was a mix of sleazy allure and a den of predatory female sharks out to take advantage of a newbie like me. The logical part of my mind knew I was basing my feelings on zero personal experience inside, but all I had were posts from other mongers, many who were pretty cynical and negative (despite partaking repeatedly).

All I did was a walk through that morning, and spent the next few days trying to find a now-defunct massage parlor, where I was able to spend some quality time with some very sweet working girls.


When I actually moved down for a trial run a few months later, I became reasonably comfortable within the confines of the public part of the hotel. I met quite a few experienced mongers, including some I recognized from the discussion board. Some offered sage advice, others spewed BS. But the main attraction were the chicas. And when I wanted a change of pace, I could walk across the street to the Key Largo, where bands played every night and the atmosphere was a little more laid back. With a sufficient stretch of the imagination, it was possible to imagine that it was just a nice dance club full of sexy girls who were quite friendly.

From 2004 through around 2008, it was fun city. In addition to the Del Rey, there were several other gringo-oriented bars nearby. Fellow gringos were easy to find to shoot the bull with while recharging batteries between ‘dates.’ This was the heyday of ‘gringo gulch.’ I would be lying if I said I didn’t have fun.

Ah… those were the days, my friend. But times change. I won’t try to explain all the causes and effects of these changing times, but almost all the gringo bars are gone and even the busiest venues have seen a significant drop in business. I haven’t been inside the pink hotel in years, but those who still live in San Jose tell me it’s pretty quiet lately. Oh well… I’ll never forget ol’ what-were-their-names…