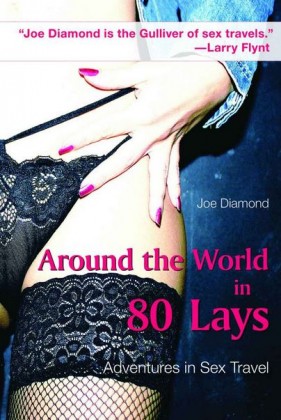 Joe Diamond explains how to become a world class sex tourist in Around the World in 80 Lays.

Although it has become fashionable for authors to describe their “game”, and picking up girls in foreign countries, Joe does not pull any punches, and in the introduction admits to paying for sex with a good deal more than 80 women. Part tour guide, and part story teller, Joe’s favorite destinations are Brazil, Dominican Republic, Costa Rica and sin city USA, Las Vegas. Years of experience writing for some of the more refined gentleman’s magazine has taught Joe how to appeal to what guys really want to hear.

In the first chapters, Joe deals with Brazil and Carnival in Rio de Janiero. Although much of this material is now dated, you can get an idea of the golden age of sex tourism in Brazil. You can still repeat many of these adventures, but costs have gone up substantially in Brazil. After Rio, Joe takes us to notable sex tourism destinations in Eastern Europe and then Southeast Asia.

The final chapter is titled, “Ticas for the Taking” and brings us closer to familiar territory in Costa Rica. Joe must have noticed the popularity of Costa Rica as he even wrote a few articles in men’s magazines about his experiences in the Sportsmens Lodge in San Jose.

Around The World In 80 Lays is a great book if you are already familiar with Costa Rica, and are thinking about making a trip to Eastern Europe or Asia. Since he deals with several destinations, you can compare to your notes and decide if Joe knows his stuff. Of course you can also tap his wealth of knowledge on Rio, and add it to your enthnographic notebook for that once in a lifetime trip to Brazil.


Around the World in 80 Lays: Adventures in Sex Travel (Hardcover)