One of the early rumors I heard was that ‘management’ got religion and wanted to get out of the brothel business, and the result would be a makeover/remodel/re-branding catering to ‘family’ guests… roughly translated, folks who are not comfortable in a hotel thick with prostitutes. It takes all kinds, eh? Then there was a rumor floating about that the place had been sold, and it would be the new owners who would do the remodeling and re-branding (or not). And the latest rumor, which seems to be true, is that the supposed sale did not happen. Whether there ever was a sale in the works or not is something I can’t say. But as of this writing, ownership has not changed hands, and the business model has not changed. 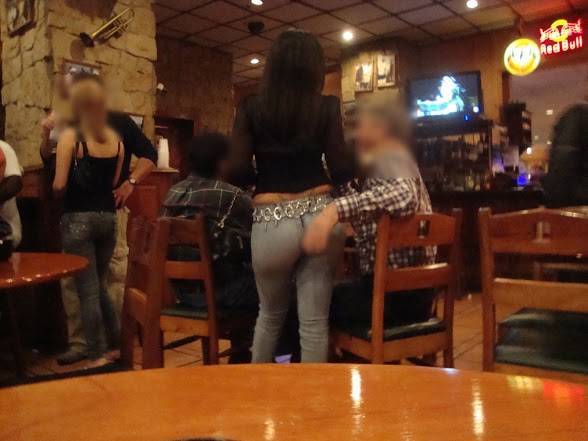 I got a look inside just tonight, and although it was less crowded than it used to be, it was doing a decent business, with a fair selection of working girls to choose from. Or just gawk at, for some folks. What I saw looked like a slow night from 2010, with the same sort of mix of males and females, though perhaps more local males than in the hotel’s prime years.

So, what does this all mean for the future of the infamous Big Pink Hotel? I don’t even want to guess, honestly. The old Gringo Gulch has shrunk to where using the term ‘Gringo Gulch’ doesn’t even seem to refer to anything other than the Del Rey. Sportsmen’s lodge is doing well, but it’s not really located in what we used to call ‘the gulch.’ Costa Rica still has some interesting things to do other than gawk at chicas, and the big pink hotel could close forever and the tourist industry would not dry up. Nor would ‘the profession’ of the chicas. It would just be less obvious and evolve along with the times. Nothing lasts forever, nothing remains unchanged forever. That’s why I recommend having fun while you can, wherever and however you can.