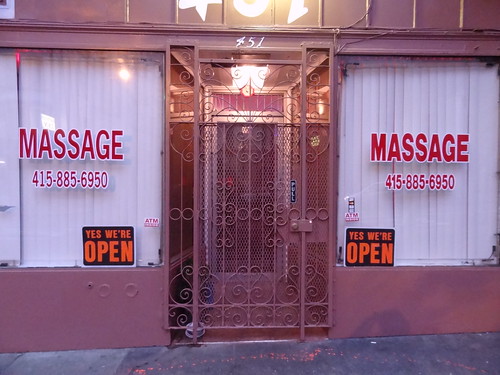 The year was 1974, the place, Santa Cruz, California. And YES, it was THAT kind of a massage parlor.

To answer the obvious question, no, I did not give massages (or ‘extras,’ as we called them). I didn’t have a title, or a salary. I was there mostly as a helper and friend to the boss, Al. Al was a decent guy who never felt the law should be taken too literally. Why I was there is hard to say other than I was young (24) and had good friends who lived in town.

But getting back to the massage parlor, it was relatively low profile and not very wild. A customer would come in and we’d hear a bell ring. One of the girls would go out to greet him. Usually there were 3 sitting in the back, along with Al and me. Nothing sexy was ever discussed, though most of the customers knew what the could ask for and how to ask for it. I can’t remember the prices, but the basic was just a massage. Among the ‘extras’ that were available if you asked the right way, were topless massage, a ‘local’ massage (guess which location), oral (not every girl would do that) and ‘full service,’ which actually only one of our girls would do.

If that seems very tame, it wasn’t considered tame in the early 70s. There weren’t any other options, and in most municipalities, there wasn’t even THAT option. In San Francisco, for example, only licensed massage therapists could work in such a place. I dated a girl for a while who went to the trouble of getting certified in order to do the gig in SF, where the pay was quite a bit better.

There was always the danger of an undercover cop coming in and trying to make a bust. The girls understood this and nobody got arrested while I was there, a month or two maybe. For me, it was the beginning of my ‘education’ regarding sex workers. Sitting in the back with the girls, I got to hear all kinds of stories about their clients, their lives, and whatever else they decided to talk about while killing time waiting for the next customer.

In general, I found the girls to be ‘interesting,’ in their own unique ways. I still remember them and I will talk about them in an upcoming post. I couldn’t possibly do them justice in what little space I have left. So this subject will… be continued!