A Rape Extortion plot came to a head this week when Costa Rica Police arrested a 22 year old women and her two male accomplices as they attempted to receive the last part of the extortion payment, which consisted of a car and approximately $1,000 in cash. 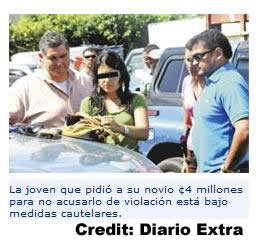 The victim, a 40 year old businessman for Monteverde had previously deposited $7,000 in the bank account of the 22 year old, former girlfriend. The couple had maintained a relationship for two years, and during this time she enjoyed a luxury apartment in San Jose, tuition to attend a private university, spending money, and all expense paid trips to foreign countries.

Apparently the girlfriend decided that she would not remain a kept women, and turned to extortion in order to live in the style to which she had become accustomed. She then secretly made a video of them involved in am amorous act in a car, parked in a secluded area. Apparently the tryst, which had been set up as a kind of fantasy was also setup to look like an assault.

Police were able to foil the plot because she used third parties to handle a money exchange, which police were able to document. The entire situation underlines one of the potential hazards faced by expats and local men alike when they form relationships with women in Costa Rica and Latin American countries.