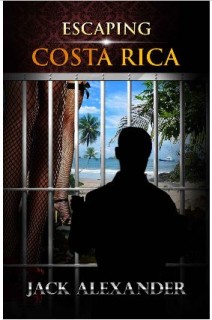 Instead of escaping to Costa Rica to enjoy the company of copious beautiful women, the dream becomes an nightmare as the main character has to fight to escape the infamous La Reforma prison in Costa Rica. Escaping Costa Rica is a book about Dave, a fictionalized expat and sex monger who finds himself behind bars in the land of the Pura Vida.

The plot for the book is basically the guy who retires early and chases the dream in Costa Rica. Living on Jacó Beach Dave spends the first part of the book trying to survive in prison, after a beating and arrest by the police in a raid on his beach condo. The charges, apparently involving some indecent behavior with an underage prostitute fabricated in an attempt to extort money from him.

Jacó, Costa Rica is the kind of place where American land developers rub elbows with narcotics traffickers and illegal sports book operators. It follows a tradition for sun and surf, amid shady land deals, dubious real estate agents, cheap cocaine and a nightly invasion of even cheaper and easier women. It’s the kind of place where a gringo can get himself in a lot of trouble. Which, of course is exactly what happens to Dave.

The description of prison life are colorful, but are clearly inventive. The plot however could have been inspired by real events. Being extorted in a Costa Rica or with a Latin America sex scam is all too real.