It’s unclear exactly how he came to be locked in the bar, but it’s apparent the person closing that night didn’t want to stick around. So, when Bill came out of the bathroom at Papi’s Bar and Grill he found himself locked inside.

Got woke up in the bar I got locked in, by the owner holding pepper spray. I was on 4 chairs, covered with a tablecloth, and had half a beer in my hand. We had a laugh when he recognized me. He said the drinks I had are on the house. 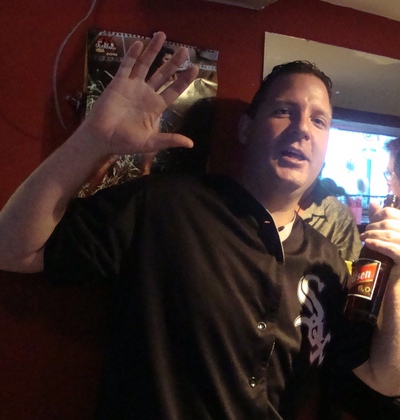 Those of you who know Bill might say that he spends so much time in a bar that a night at Papi’s might not be much of a hardship.

The problem, however is it can get pretty lonely when you are locked in alone. Bill did admit that he helped himself to some beer, but dutifully recorded consumption on a factura.

He happened to have the cell phone number of the bartender, but she didn’t answer and no one was able to come to his rescue.

Since the unfortunate incident Bill has reported to be more careful around closing time.