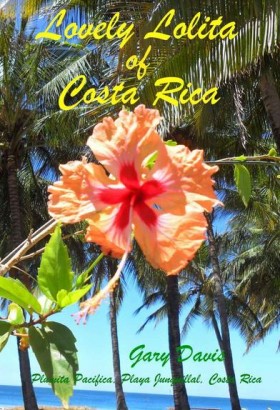 Expat and real estate speculator Gary Davis shares his experience courting young ladies while living on the Pacific coast of Costa Rica in Lovely Lolita of Costa Rica. Described are no less than thirteen romances that Davis shares with lovely Ticas, along with the excitement and complications that come with each one.

At the beginning of the book Davis explains his first trip to the Pacific beach town of Jacó, and how he has to deal with the mistake of coming in the middle of the crazy Easter holiday or Semana Santa in Costa Rica.

As the story goes, Davis wasn’t exactly looking for ladies of negotiable affection, but one manages to latch onto him after he accidentally goes to the Beatle Bar.

He ends up getting a TLN (Todo La Noche), which comes with a surprise in the next morning.

Later encounters with Tica Lolitas get away from the experiences of a tourist and transition to what you would expect from an expat who has a good deal more time to spend in Costa Rica. For example, Davis is quite pleased to have his next girlfriend tour Guanacaste with him in search of real estate property.

Other relationships revolve around the usual subjects of romance, family life, money, and commitment. Davis ends up building a vacation property in Playa Junquillal in Guanacaste. Although he has no qualms about using his real name and telling everyone about his romantic life, the names of the Lolita Ticas are never disclosed.

Perhaps the use of the term Lolitas is a bit of a mistake on the part of Davis. Clearly all of his girlfriends are at least eighteen years of age or older, and the name Lolita has some associations that do not apply here.

It is also clear that the stories could be developed a good deal more than the brief experiences he shares. Five years is a long time in Costa Rica, and this relatively short ebook must surely just be the tip of the iceberg. However, Lovely Lolita of Costa Rica is a good value considering the $2.99 price tag.