Local police completed a sweep last week of downtown San Jose, which included a visit to the Hotel Del Rey. The action was particularly high profile as the minister of public security, Janina del Vecchio Ugalde accompanied the officers during the sweep.

Police inspected  hundreds of ladies, purportedly waiting at the various bars in San Jose and hoping to meet generous North American gentlemen. A few were detained for possible immigration violations, and the rest were deemed to free of outstanding warrants and safe for mixing with foreign tourists. 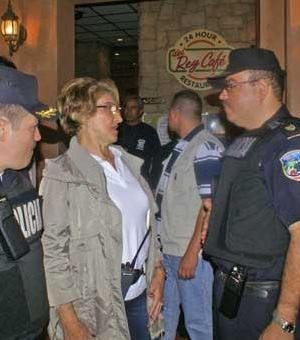 Several American men drinking at the bar commented that it felt a little strange to have uniformed police stroll around casually and generally ignore them while they focused all their attention on the girls. It’s possible a few had a guilty conscience of turning up to party with so many young and attractive Latina women.